skip to main | skip to sidebar

Jeanette Winterson "Oranges Are Not the Only Fruit" 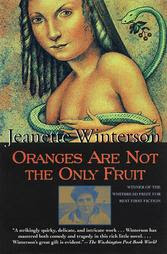 Based on the writers childhood events. Great book!